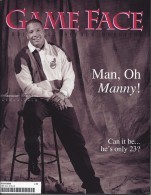 Manny Ramirez is on the cover this Game Face program. This program was available to buy in May during the 1995 season at Jacobs Field. Manny Ramirez has the feature article that is five pages long with a two page picture. In 1995, the major league was celebrating its 50th anniversary and there is an old photo of Lou Gehrig in a Columbia uniform. If you have this program or want to get this program. You will want to look at the ads. The ads are always interesting and how advertising has changed. How Collectible is the 1995 Cleveland Indians Vol.9 No.2 Program?