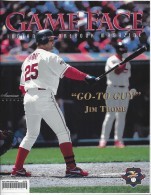 Jim Thome is on the cover this Game Face program. This program was available to buy during the 2001 season at Jacobs Field.Jim Thome has the feature article that is five pages long with a two page picture. If you have this program or want to get this program. The Cleveland Indians went 14-9 in the month of April with one rain out against the Tigers on April 15.