Rempel was a company that made rubber squeak toys and was based in in Akron, Ohio. Akron is the rubber capital of the world. Rempel was founded in 1946 by Dietrich Gustav Rempel. Dietrich was a Russian immigrant Rempel named him Big Chief Erie but has been widely known as Chief Wahoo. Chief Wahoo is the mascot for the Cleveland Indians. Fred Reinert designed Chief Erie for Rempel. Fred Reinert was a cartoonist for the Plain Dealer in Cleveland, Ohio between 1953-2010. There have been many of 1949 Rempel Rubber Indian on ebay but you don’t see ones in good condition that often. The 1949 Rempel Rubber Indian are very rare and hard to find. You will pay a premium for one in great condition. You will also pay more if you find somebody with the box of 1949 Rempel Rubber Indian. These are highly sought after. Cleveland Indians fans look for these since Chief Erie resembles Chief Wahoo. 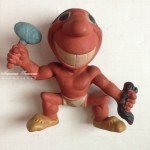 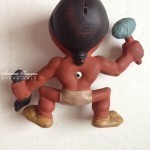